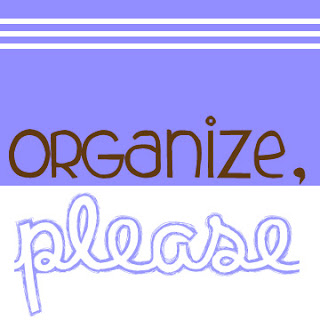 I am a gmail addict and have a huge system worked out.
I have a few email accounts.  An AOL one (I know, so 1990s) that I use for pretty much everything, my Georgetown address, and a few gmail accounts.
(Speaking of email addresses, you can reach me at carly [at] thecollegeprepster [dot] com)
Before I begin, you should note that under no circumstances can I have an inbox with unread emails.  ;dffkjhlajkhslash CRINGE!

This can be problematic though because what if I read an email, but need to refer to it later?  I also have a Droid, so I read a lot of emails on my phone, and 3 out of 10 times I need to respond, but don’t want to type a response on my phone.
Dilemma?  Nope!
Gmail is genius for creating “Starred” emails.

As I read the emails, I quickly run through a question/scenario map for each one. 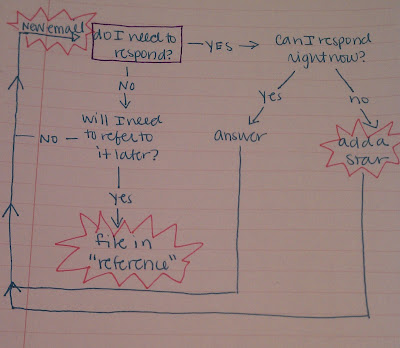 Starred emails are for emails that need to be responded to.  At the end of the day, I’ll go through and try to answer as many of the starred emails as possible.  Sometimes a starred email has to sit around for a few days or weeks depending on how long I need to find the appropriate answer.
Long term emails that I will need to refer to later (e.g. informative emails I need to save, etc.) get stored under the label “Reference.”
If you use gmail, I’m sure you’re familiar with labels.  They’re the easiest way to store and sort your emails. 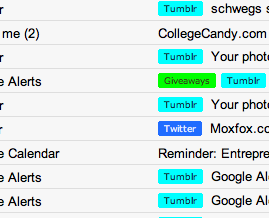 I can glance at my emails and know right away what kinds of emails I’ve received.  Most labels I have set automatically (like Tumblr and Twitter notifications), but others I manually add as necessary.  I even have a whole label dedicated to nice emails (and mean ones too haha) that I’ve received!
Having a clean inbox is one way to be more productive.  I rarely let an email slip through the cracks and I can always find emails in their appropriate label boxes!
Do you use gmail/labels/starred emails?

I would not function without gmail labels and stars! I have labels for school, family, blog, tumblr, college etc etc and it works so well! Gmail is the best!

I was so happy when I discovered Gmail…my school's email system is absolutely horrible and hard to navigate, so I redirect all my mail to my main Gmail account. I love being able to switch back and forth between my accounts with ease.

I love gmail for this reason. I tend to get unorganized easily but having folders and stars on gmails helps me compartmentalize. I have a hard time deleting emails I think might be of some importance. The only thing is I often check them on my phone or in Mail and then neglect gmail. I need to take an organization lesson!

I use my AOL e-mail as my primary e-mail for everything! I've had it for like 9 years. I thought I need a gmail e-mail because everybody has one but I don't use it that much. I have all my e-mails forwarded to Windows Mail and just use that. I sort my e-mails into folders but the subject of the e-mail. I love your question map.

Haha, again we are so alike!! I use Yahoo but I do the exact same thing – everything in it's relevant folder but the read but not responded ones sit in my inbox until I have replied…

And after all that, I am going to send you one now (hope it's starred, responded to and part of the nice group!)
x

I love the Gmail priority inbox organization. I hate that Hotmail doesn't have that. I look at my Hotmail account and sigh because I can't tell, at a glance, which ones are most important and which ones are just being "stored"!

I also can't stand to have any unread emails. Eeek!!

Thank you for answering my prayers! I have always wondering what I should use that precious star for. Up until now it has been some annoying feature that I have no idea what to do with. But now… THANK YOU!

Do you utilize the priority inbox that Gmail offers? I love that I can seperate my inbox according to priority emails (real people and or work email) and unimportant email (twitter updates) in a normal inbox. GREAT FEATURE!

I had no clue that you could label your emails. I do know about the stars. You may have just changed my life!

That's exactly what I do! I have a Droid so I place a star next to emails that I need to respond to but can't yet. And, I LOVE labels! My Gmail is currently featuring labels that coordinate with my pink theme. I changed the color scheme the other day when I converted to the Lilly theme for Chrome 🙂

This is why I love having a crackberry: so much less to sort through when I open my Hotmail inbox! In fact, I just deleted an email on it as I'm typing this 😛 It's especially helpful for all the junk that different stores/websites send out (If I bought something everytime I got a 30% off email from J.Crew…)

I keep separate folders for different emails I want to save for later reference (college-related, school documents, shipping info, etc.)

I am obsessed with gmail…you definitely utilize it more than I do though!
P.S. this is so random, but do you by chance know Henry Hoffstot or Leslie Robertshaw? I went to a private grade school and remembered they go to Georgetown…huge school though, so its probably a long shot. Just thought I'd ask! Hope your week is going well love!

I really like gmail, but my current account gets so much junk it's irritating! So I pretty much switched over to yahoo.

I too cannot have unread emails or any messages for that matter. If my Blackberry is flashing with something new I have to look at it!

I use the labels on gmail- but how did you get the label right next to the email?
That would be so helpful!

Thanks for the advice!